I got my first SSD drive back in 2009. It was in fact a pair of 60 GB OCZ Agility drives, which I ran in RAID-0 (striping) configuration. Each OCZ Agility drive delivered about 200 MB/s writes and 300 MB/s reads, which amounted to about 4-5 times(!) the performance of a regular consumer spindle hard drive. In RAID-0 the performance boost was insane. Two drives back then cost me $360, but I never looked back and never bought a spindle drive since, except for NAS to store media.

Now it's time for another similarly-unbelievable permanent storage performance increase. Long past the time it should've happened, the outdated SATA storage interface is giving way to PCIe 3.0 x4 with NVME protocol, in the form of the M.2 physical connector. As you'll see below, that's again, a 4-5 times performance gain compared to the SATA SSDs of yesterday. And for M.2/PCIe it is only a beginning. Storage capacity and performance increases based on Moore's law promise truly incredible gains in performance of computers and other devices, while shrinking in size and getting much less power-hungry.

Here's what it meant for me in practice. A few days ago I got an inexpensive and somewhat old AsRock Z97 Extreme6 1150 motherboard to carry over my aging but plentiful 24GB of DDR3 memory. This $120 Z97 board has one little nugget: a PCIe 3.0 4-lane M.2 (NVME) interface, allowing connecting the first consumer NVME drive that hit retail shelves: Samsung Pro 950 512 GB SSD drive. 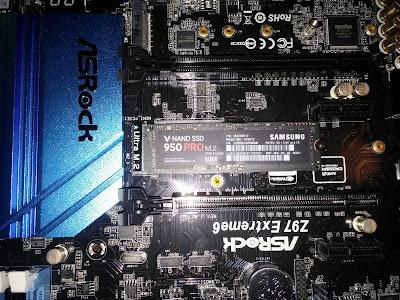 And here's the ATTO benchbark of two SSD drives connected to it: old SATA Samsung Evo 512 GB on the left, and Samsung Pro 950 512 GB attached as M.2 PCIe x4, running on Windows 10: 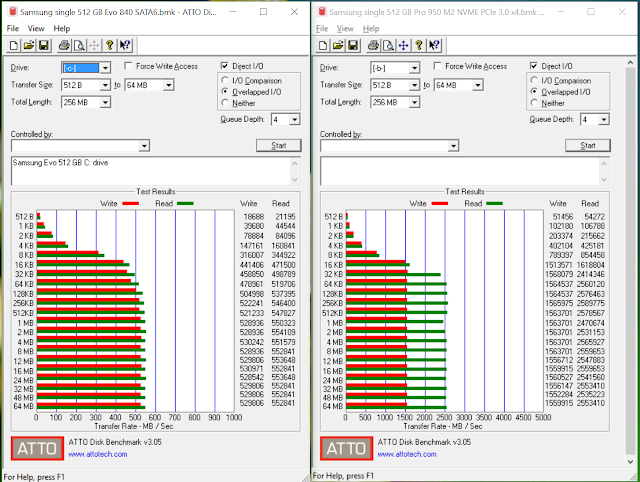 Behold the difference: 3 times gain in write and 5x gain in read speed for the new vs the old SSD, on 2-year old motherboard! It looks like it's time to stop buying SATA drives, everyone, and move on to Ultra M.2.
Posted by Vlad H at 7:22 PM